Encountering orcas was a much rarer event than being with the humpback whales in Southeast Alaska so I always viewed it a special treat and a bonus for the summer. I always felt like I had to shift up into a much higher gear with the faster swimming orcas, and I usually knew that something out of the ordinary was going to happen. Most of pods of orcas I encountered were small transient pods specializing in hunting for marine mammals. On this occasion I was able to paddle many miles with a very large pod of at least 30 individuals that spanned the width of Chatham Strait. It was a beautiful, sunny day and the sea was calm without a puff of wind, which always makes it a bit easier to keep up with them. They appeared to be hunting for salmon by corralling them judging from the way their speed and direction changed periodically. It’s fascinating listening to the extensive chatter of orcas; they are much more vocal than the humpbacks and can produce a great range of sounds from clicks, squeals and whistles to what sounds like someone knocking on a door. The most memorable thing that happened on this day involved some young calves, which like the humpback calves were very inquisitive about me. I had just stopped for a rest and was observing the behavior of some of the orcas swimming past. Suddenly two calves popped their shiny black heads out of the water right next to the cockpit of my kayak! They were chattering away at me with their squealing and whistling, and after greeting them with a very surprised “hello’, my next instinct was to pat them on the head like puppies, but they disappeared before I had the chance to do that.
I never ever felt threatened by orcas, even when the big bulls would sometimes swim straight towards me, and they would twist sharply at the last minute just before their tall dorsal fins could slice into me. I’m quite sure that they were only ever inquisitive about me. 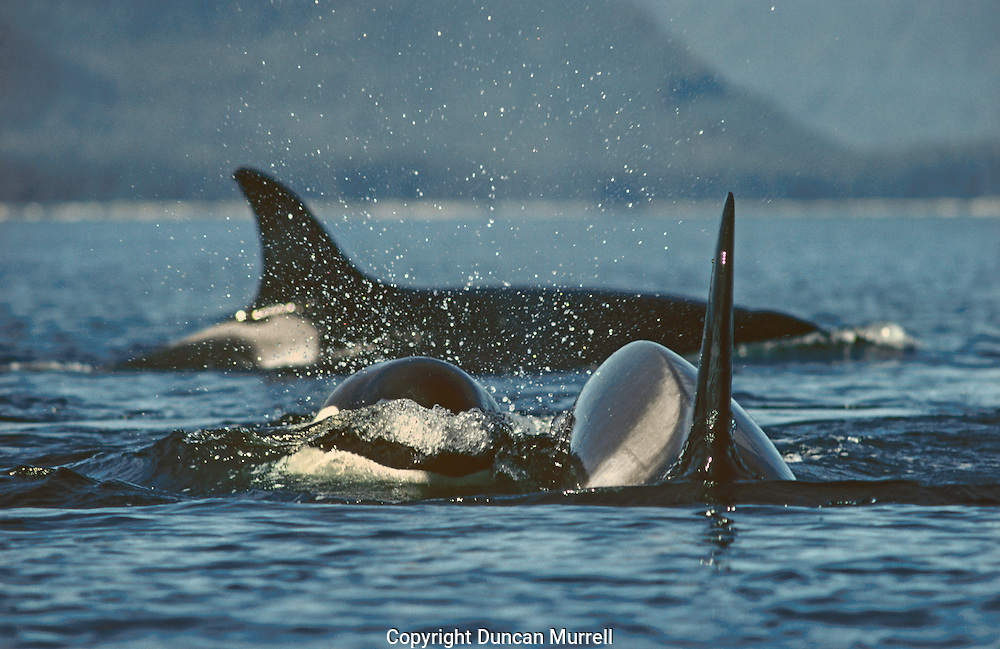