I often used to creep up close to the sea lions hauled out on Yasha Island, just off Point Gardiner at the southern end of Admiralty Island. I could see this young sea lion laying down on its belly, and that it had something around its neck, but nothing could have prepared me for the gut-wrenching sight when it reared up and I could see the full extent of the damage and suffering that this poor creature must have endured. The net had become deeply embedded in its throat as it had continued to grow after first getting entangled with it when it was probably playing with it. One strand of the net passed through its mouth like a horse's bit, and had pulled its mouth back into a horrific frozen grimace. I felt so sickened by the daily torture that this poor animal must have been subjected to, but it also seemed like it had somehow adapted to it demonstrating the incredible resilience of wild animals. Apart from its horrific embedded necklace it looked just as well fed and healthy as the other sea lions. I felt compelled to try to capture it without really knowing how I could hang onto the sea lion to remove the net, but I wasn't able to get close enough without disturbing all of the sea lions. When I returned to Petersburg I reported it to the Dept of Fish and Game, and was glad to hear that they were going there to do a survey, but unfortunately I later heard that they were unable to find the poor animal. I don't know how much longer that it would have been able to survive like this if it was still growing.
This kind of entanglement in fishing nets is a major problem for all marine life, but it must be particularly so for sea lions because they are so inquisitive and playful. A few years later I was working on a whale research boat in Sri Lanka, and we came across two turtles entangled in a big clump of fishing net, but fortunately we were able to free them. 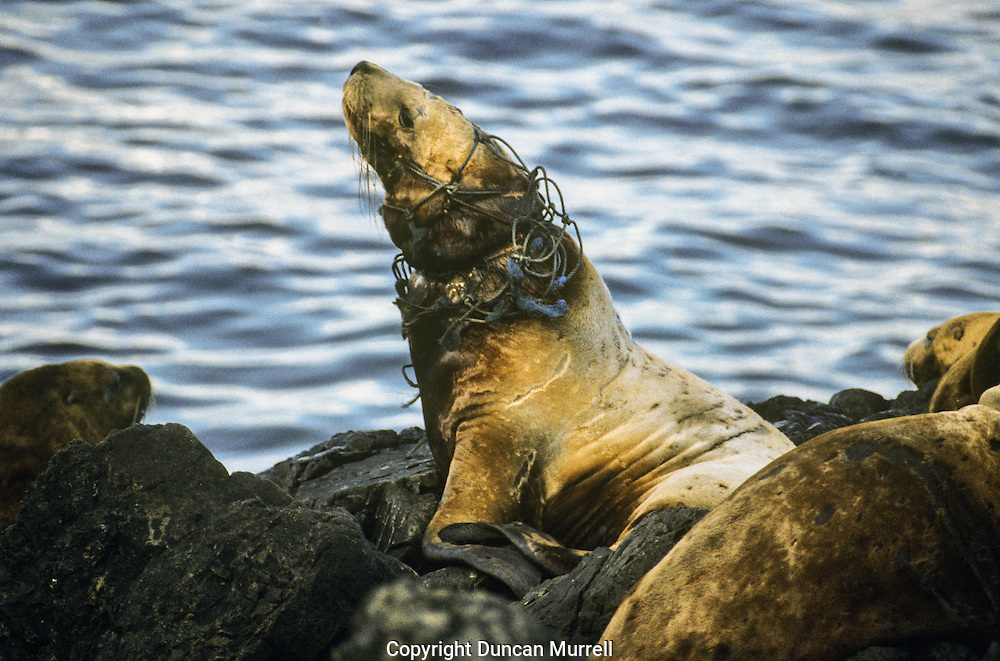