California sea lion (Zalophus californianus) sleeping on the back of my kayak with me alongside, Los Islotes, near Isla Partida in the Archipielago de Espiritu Santo National Park, near La Paz, the Baja Peninsula and the Sea of Cortez, Mexico.

This was an unforgettable wild encounter! The sea was very cold so I had to haul myself back into my kayak to warm up, with my legs dangling over the side and my flippers slapping the surface like a stranded fish. Moments later I was surprised to see another kayaker paddling towards me; It was an American called Corrie who told me that he had just made the long sea crossing from Isla San Jose. It was great to be joined by another kayaker and even greater when I discovered that he had a wetsuit! There was no holding back now so I returned to the underwater circus. I discovered that there was one juvenile sea lion that was bolder than the others. At first it was trying to bite my mask and then it was nipping my chest as if it was trying to suckle from me; I think that the black neoprene wetsuit had transformed me into a marine mammal! This apparent attempt at bonding with me was taken to the next level of hilarity when all of a sudden I was aware of its flippers being wrapped around my body from behind and then feeling the little clown clinging tightly to my back! I reached behind me to feel it and it was very smooth, soft and spongy, making it conform to the shape of my back like an orthopaedic back-support. I continued swimming along with this unexpected diving accessory still firmly clamped to my back like an air cylinder. It eventually released me and disappeared momentarily; then Corrie exclaimed, “look at your kayak!” and to my amazement I watched it hauling itself onto the back of my kayak! It promptly settled down for a snooze on the most comfortable and exclusive bed available. Corrie climbed into the cockpit of my kayak to take some photos of me with my new friend, or should I say foster child, as photographic evidence was surely required. Corrie tried to evict the stowaway with my paddle, but the little rascal nipped at it and promptly slid down inside the cockpit to confirm its status as a stowaway but it was eventually evicted after much protest. 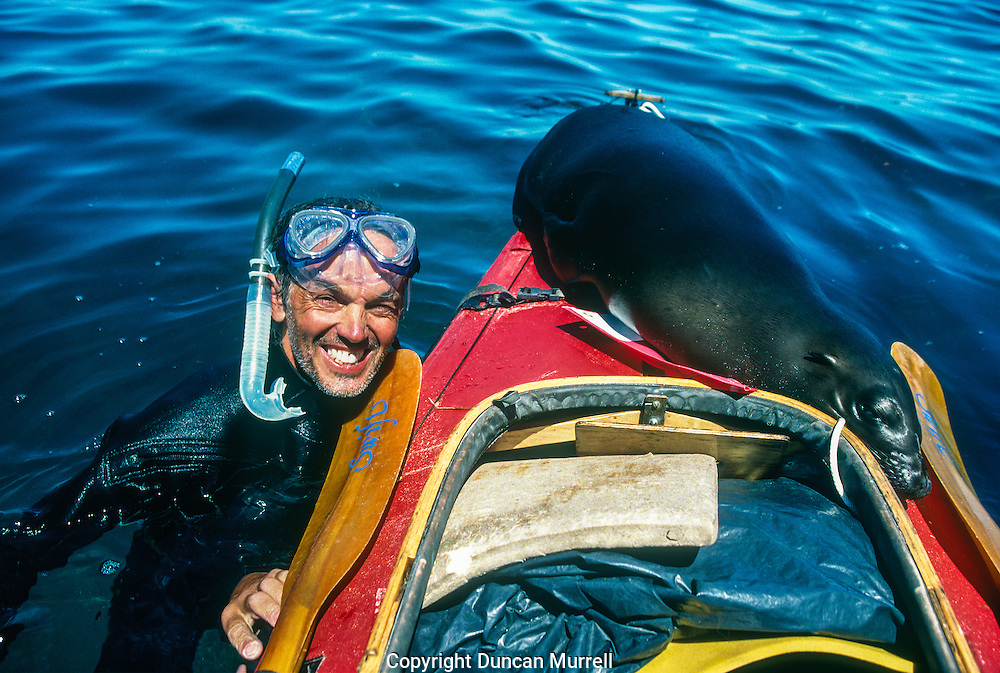