After many years of good service from my ageing Klepper Aerius 1 folding kayak, I invested in a new French Nautiraid Raid double folding kayak, which is a small double that is very adaptable to paddle as a solo kayak. It gave me more carrying capacity and a larger, more comfortable cockpit to work from and move around in, but such a large beamy kayak required more effort to paddle it. It was much easier to pack than my old kayak and it was also incredibly stable, even in rough sea conditions. I very rarely used the cockpit cover and sprayskirt, which sometimes got me into trouble in heavy seas. After a few years of heavy usage the deck leaked quite badly, which was a serious problem in heavy seas, and contributed to one of my worst near-death experiences when I got caught in bad weather crossing Chatham Strait, and my kayak filled up with icy cold water. I had to keep stopping to pump out the water but part of the pump came out so I had to use my cup to bale out the water after that. I only just made it and was shaking from being so chilled and the trauma for a long time even though it was a warm sunny day.
This photo was taken by fellow whale photographer Francois Gohier from France. I had been familiar with his work for a long time as one of the most published whale photographers. He was shooting from a boat at one of my regular locations and camp sites, where the whales often perform bubble net feeding. He was kind enough to send me some of the photos that he took of me and commented, “You really know how to do things the hard way!” I couldn’t disagree with that comment because that’s my style, and even to this day I still do things the hard way because it’s the only way that I know how to be. 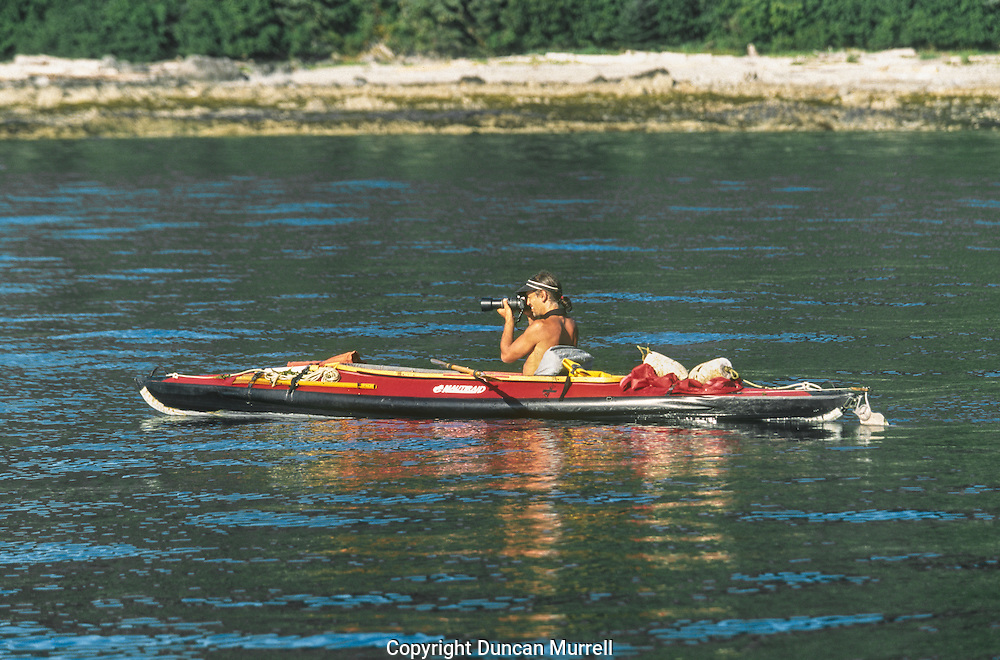