Common raven (Corvus corax) perched on a cactus and calling on one of the Los Candeleros islets in the Bahia de Loreto National Park, the Baja Peninsula and Sea of Cortez, Mexico.

When I was camping on one of the Los Candeleros islets, I was sharing it with three ravens. They were rolling and tumbling acrobatically in the updraughts that were whipping up the precipitous face of the island. I have developed a special affinity with that most ubiquitous, intelligent and successful of all birds over many years in Alaska, where their amazing repertoire of calls is an integral feature of the ancient forests. I have even learnt how to mimic some of their calls and capture their attention. After a few days cutting the ice with my fellow residents one of them started flying out to my kayak to seemingly greet me whenever I returned to the island; it would circle overhead whilst calling out and then escort me back to shore.
After a couple of weeks of familiarisation my glossy black friend vanished. A few days later I landed on a nearby beach at Ensenada Blanca to visit an American living in the local fishing village. As I stepped ashore I noticed a raven flying demonstrably towards me. I replied to its raven calls and it flew overhead and did a few rolls as if it was showing off. The acknowledgement was plain to see, rather like a dog wagging its tail. Then it flew ahead of me and proceeded to harass and dislodge the turkey vultures that were perched in the trees. After each successful assault it called out and then proceeded to dislodge another vulture in the next tree; within seconds the sky was full of screeching, disgruntled vultures! It seemed as if the raven was clearly intoxicated with its own sense of bravado, and maybe it was even trying to impress me. When I arrived at the American’s house at the end of the beach I told him about the hilarious encounter with my shiny black friend and when he looked out of the doorway to see if the raven was still out there he looked at me, laughed, and informed me that it was waiting outside for me, and sure enough it was perched on a cactus just a few metres from the door! 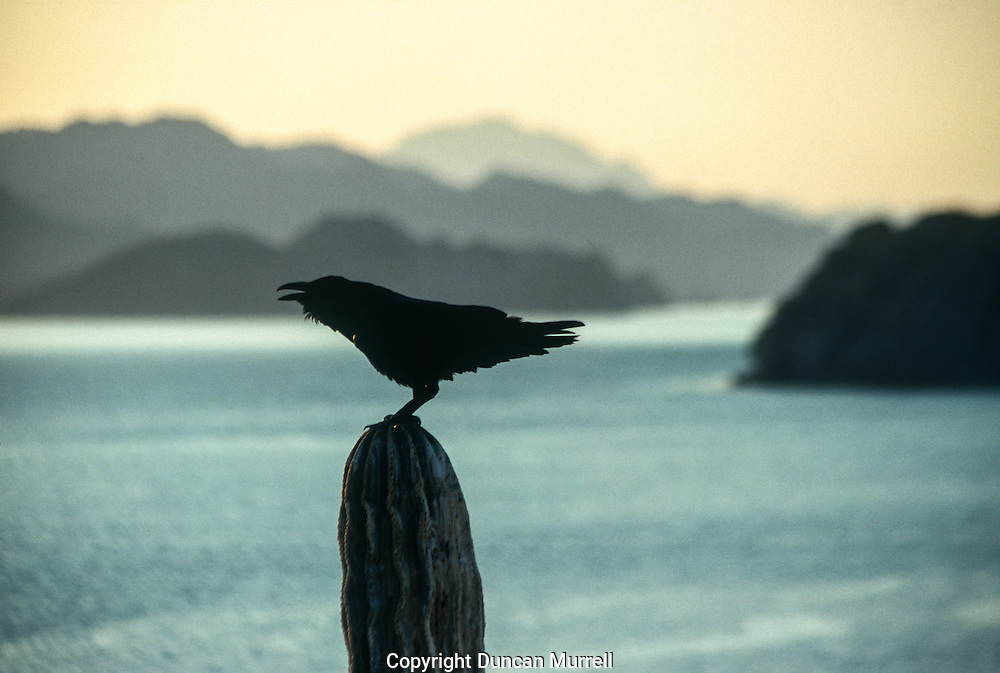