Steller sea lions are very vocal and a sea lion haulout is one of the most cacophonous “resting’ places you will encounter in the animal kingdom. They alternate between relative calm to absolute pandemonium if one sea lion decides to climb over its neighbour; the protest rapidly activates the entire mass of beached blubber. I often took advantage of the chaos by sneaking unnoticed amongst them and then remaining motionless to enjoy the entertainment at close quarters. I usually had to crawl through pools of stagnant water but I became accustomed to the sensory delights of an assembly of sea lions that assails just about every sense.
Adult males establish territories and aggressively defend them. Steller sea lions gather on haulouts or rookeries, and regularly travel great distances (up to 250 miles) to find food. They can travel much further and juvenile sea lions have been known to travel over 1,000 miles. They are opportunistic feeders and eat a wide range of fish including herring, Pollock, salmon, cod and rockfish as well as squid and shrimp. I have even observed them catching seagulls on the surface. When males are defending their territories on the rookery, they may go without eating for over a month. On this individual you can clearly see the long, stiff whiskers that are used to navigate underwater and to assist in the location of their prey; Also the external ear flap, which points downward to prevent the entry of water when they are swimming.
I witnessed many amusing incidents at the haulouts. The juvenile males could often be seen to be hanging around in “mischievous” gangs that delighted in antagonizing the pompous old bulls. On one occasion I witnessed some young bulls leaping out of the water to nip a large bull precariously perched on a narrow ledge above them. He was unable to defend himself and eventually he fell into the water with a resounding splash. 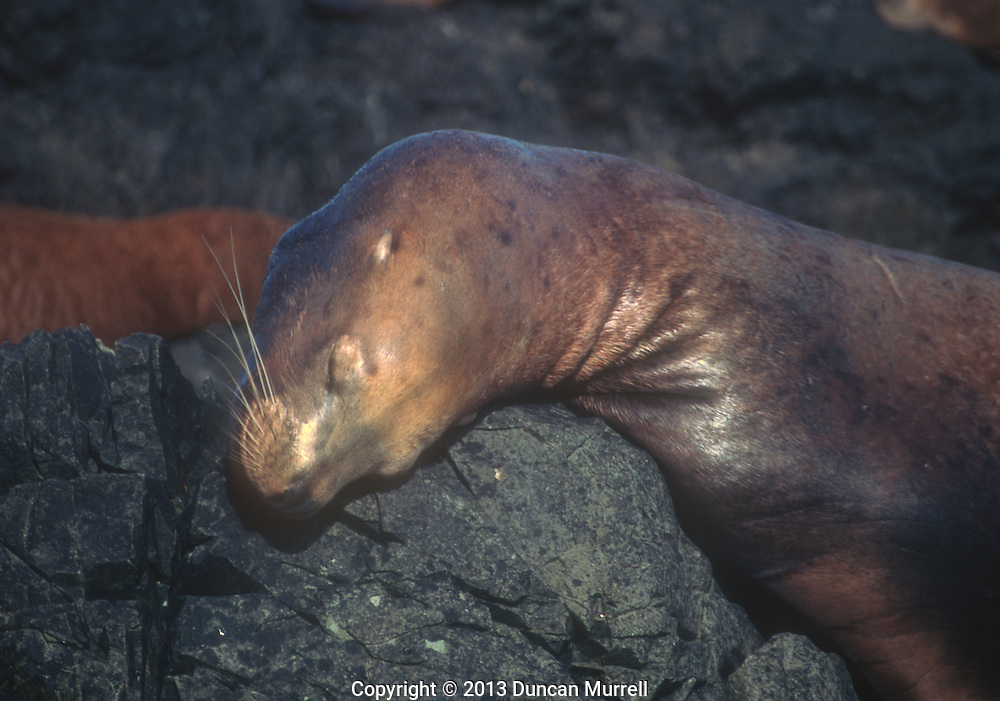