Lunga is the largest island in an archipelago of small islands and skerries that stretches roughly 7 kilometres (4.3 m) called the Treshnish Isles. Lunga is designated a Site of Special Scientific Interest because of its abundant plant life. Many rare and endangered plants are native to the island. Plants include primrose, birdsfoot trefoil, orchids, sea campion, sea thrift, sea pinks, yellow flags, tormentil and the oyster plant. The Treshnish Isles are also designated as a Special Protection Area due to their importance for breeding seabirds such as storm-petrels, kittiwakes, Manx Shearwaters, guillemots, puffins and fulmars. They are also a marine Special Area of Conservation and grey seals can be found there along with basking sharks, as I was pleased to discover. I particularly enjoyed watching the seabirds nesting on the precipitous cliffs, and a dramatic sea stack called the Harp Rock separated from the island by a narrow passage. It was hypnotic to watch the real masters of flight like the kittiwakes and fulmars launching from their precarious nests and soaring in graceful arcs in front of the cliffs and above the rocks and meadows.
Lunga was populated up until the 19th century, and to the NE of the island, and just around the rocks to the right of this photo can be found the ruins of the village, which was abandoned in 1857. I often used to sit in amongst the ruins looking out across the sea dotted with vegetated skerries towards Mull and the mainland wondering what it must have been like to live there. I camped there for a week, and it was a wonderful place to live during the good weather of the short Scottish summer, but I can imagine how challenging it must have been to eke out a subsistence life there in the past. 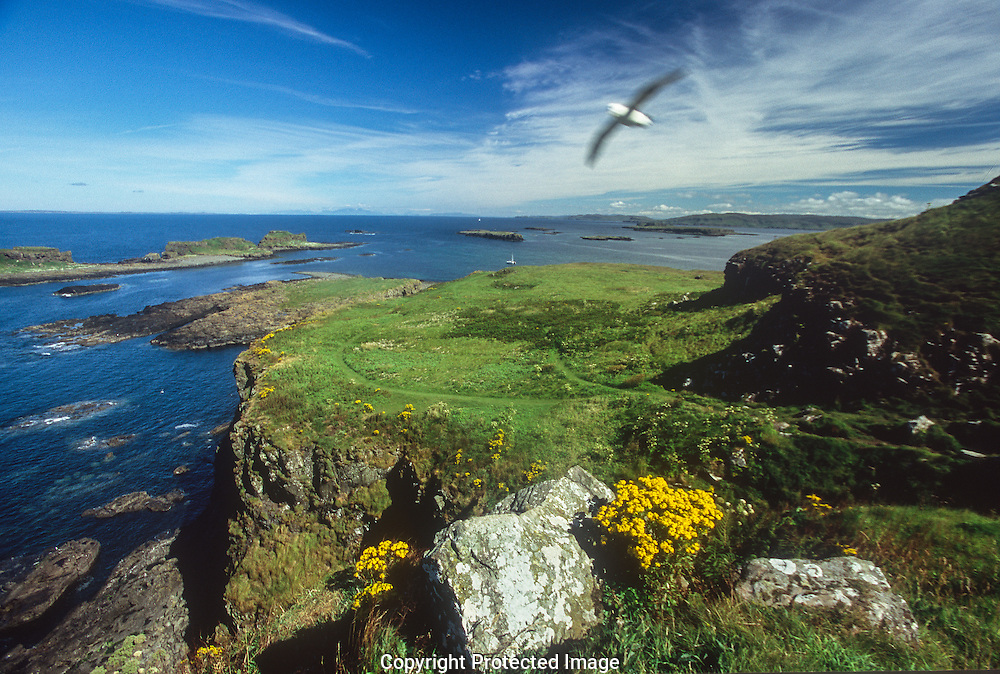