Family mausoleum of Sir George Bullough of Kinloch Castle, on the Island of Rum, the Small Isles, the Inner Hebrides, the West Coast of Scotland.

In 1888 the island was acquired by Sir George’s father, John Bullough, a cotton machinery manufacturer and self-made millionaire from Lancashire, England. Rum was used by the family as a hunting estate and when John Bullough died in 1891 he was interred on the west of the island, at Harris Bay, in a rock cut mausoleum.

Legend has it, that a guest of the Bulloughs remarked that the rock cut mausoleum (having mosaic tiling to the interior) was “redolent of a public lavatory in Waterloo Station”. Sir George, who had been knighted in 1901 and who had set about a programme of improvements on the island which included the building of Kinloch Castle, commissioned a new Grecian inspired family mausoleum (also at Harris Bay). Upon its completion the original rock cut mausoleum was demolished and the remains of George’s late father were reinterred within the new monument.
The body of John Bullough was joined by his son, Sir George Bullough who died in France in 1939 and that of his wife, Lady Monica who died in 1967 at the age of 98. Though Sir George and Lady Monica’s daughter, Hermione, is not interred therein her name was inscribed on the side of her mother’s tomb during recent conservation works (completed 2006).
Though the island and castle are now owned by Scottish Natural Heritage the mausoleum remains in hands of the Bullough Trustees. 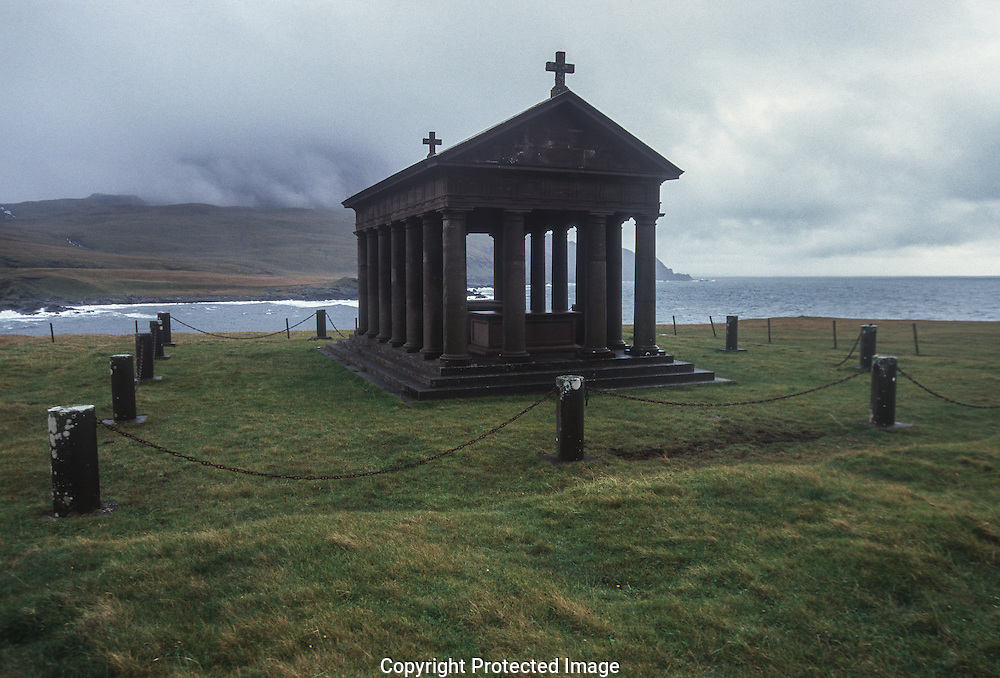